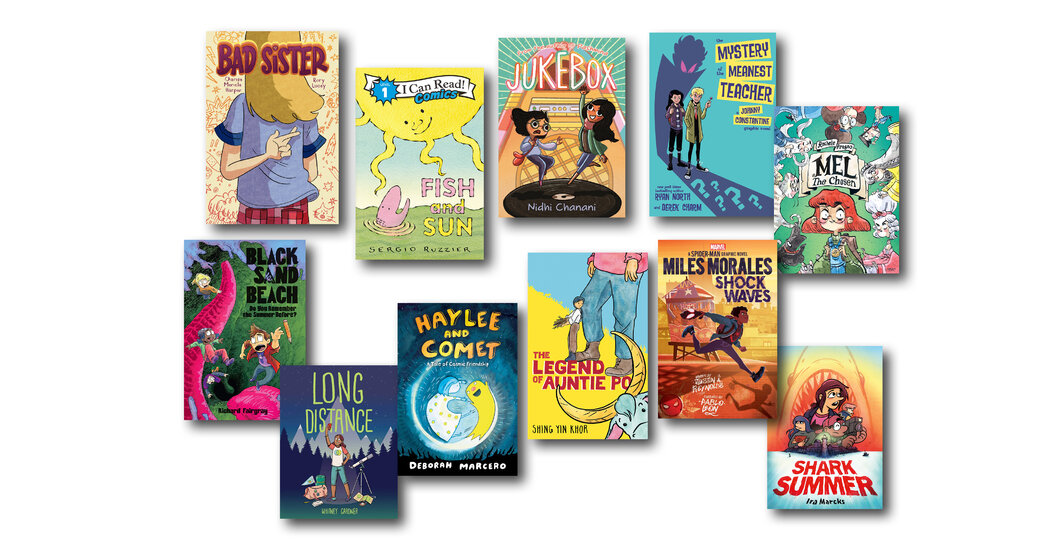 DC anti-hero John Constantine first appeared in the 1980s “Swamp Thing” comics, where he was drawn to look like Sting. He became the main character in the “Hellblazer” and “Constantine” series, and also appeared in Neil Gaiman comics. This new series of graphic novels from North and Charm (the duo behind the Eisner Prize-winning “Unbeatable Squirrel Girl” series) is sort of a prequel, describing Constantine’s life as a young “mad blazer” and his evolution as a wizard. Shortly after we met, the 13-year-old British hooligan was dispatched by his parents to an American boarding school in Salem, Mass., Where he teamed up with Anna (Zatanna Zatara when she became a superhero), the only other student. school who appears to have magical powers, to investigate why their history teacher witch hates him not only on sight, but also plans to destroy the world. Ms. Kayla sports a Cruella de Vil-type white lock in her hair and looks at him through satanic red glasses. But remember what history tells us about witch hunts. On the friends side, in their half-terrifying, half-satirical fight against evil, is also the good demon Etrigan, who loves heavy metal music and speaks in rhyme.

Not to be confused with Peter Parker, that other Spider-Man from Queens, Miles Morales lives in Brooklyn, where he attends charter school. (Far from being rivals, however, he and Parker are mutually supportive friends.) When an earthquake hits Puerto Rico, his mother’s birthplace, Morales helps organize a fundraiser. Then the father of a new classmate, who works as a security analyst for the event’s biggest sponsor, disappears. Reynolds (author of the young adult novels “Opposite of Always” and “Early Departures”) and Leon (nominated for the 2019 Eisner Award for his original comic story “The Journey”, featuring true tales of Latin American migrants) emphasis on family ties and ethnic pride.

When Mei was little, her father told her stories about Chinese heroes and gods. But he didn’t tell her anymore. It’s the late 1800s and Hao is a chef in a logging camp in the Sierra Nevada, responsible for feeding 100 loggers and 40 Chinese workers who pay their own pensions. Mei helps in the kitchen. Although she was born in Reno and has never been to China, she now tells the children at the camp her own Chinese stories – vivid and inspiring Paul Bunyan-style stories about the elderly Po Pan Yin (“Aunt Po “), who” led the most efficient logging team west of the Mississippi, “and her loyal blue water buffalo, Pei Pei. Khor, a Chinese-Malaysian immigrant and US citizen since 2011, draws Aunt Po like a giant, with superhuman strength, and writes wise words for her to speak. Anti-Asian racism abounds: some of the Chinese workers are attacked and injured by “prowlers” aiming to drive them out of the city, and the foreman is threatened with a boycott if he continues to employ them. Part of the dialogues in this hopeful, humane and stimulating story are presented in both English and Cantonese (the translations were made by Khor’s mother and most Chinese characters are from his hand). Mei’s silent crush on the foreman’s daughter, Bee, who she grew up with, is a beautiful and subtle subplot.