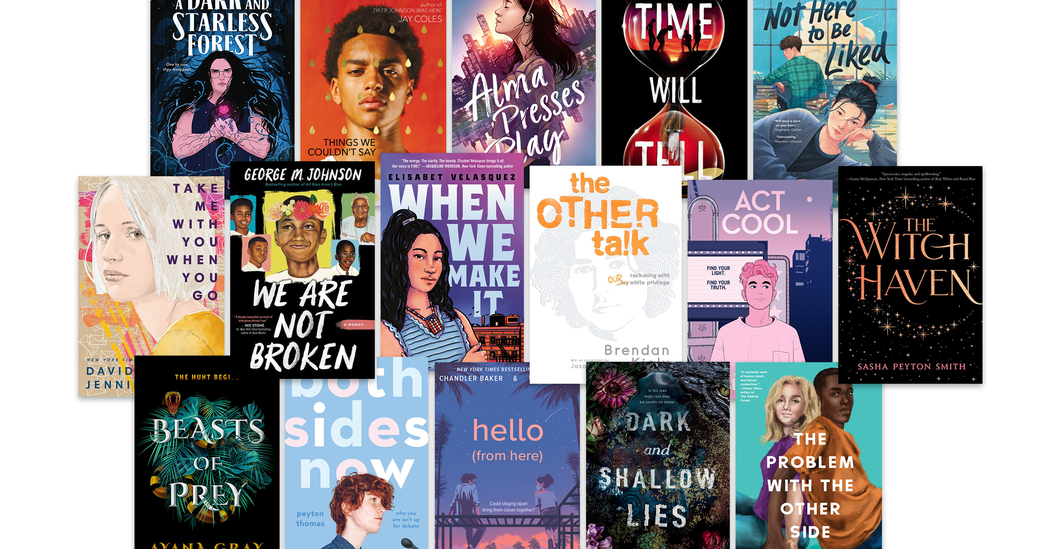 ‘On both sides now, ‘by Peyton Thomas (Dial Books, August 24)

Finch Kelly is a transgender teenager whose dream is to attend Georgetown University, the first step in his plans to become the country’s first openly transgender congressman. He thinks the ticket to Georgetown wins the national speech and debate tournament, but when he finds out the topic of the year, should transgender students in public schools be allowed to use any washroom they choose? – he must decide if arguing against his own humanity is a price he is willing to pay to achieve his dreams.

‘Take me with you when you go, ‘by David Levithan and Jennifer Niven (Knopf Books for Young Readers, August 31)

An e-mailed epistolary novel, “Take Me With You When You Go” follows two siblings, Bea and Ezra, as they attempt to escape their abusive stepfather. When Bea runs away, Ezra thinks he’s been left on his own, but then finds an email address Bea left him. This is a powerful and moving correspondence on what it means to find safety and build a life on your own terms.

A mix of historical fiction and fantasy, “The Witch Haven”, set in New York City in 1911, follows a 17-year-old seamstress named Frances Hallowell. When her boss attacks her, Frances, trying to defend herself, accidentally unleashes supernatural powers she didn’t know she had, and it kills him. Frances’ newfound abilities land her in the midst of a much bigger mystical struggle than she is, as she still tries to shed light on her brother’s mysterious death.

Gray isn’t a psychic, but everyone around her is, including all the women in her family and a whole bunch of other people in La Cachette, La. Considering everyone’s abilities, this is all the more confusing since no one in town seems to know what happened to Elora, Grey’s best friend, who once entered the swamp and was never seen again.

Uly, who is black, and Sallie, who is white, are in a happy relationship. Next, Sallie’s older sister Leona announces that she is running for student body presidency, vowing to pressure the school to end the school’s send and receive policy. of accepting students. smaller and poorer neighborhoods. Seeing the racism in Leona’s post, Uly’s sister, Regina, decides to go for it. Both candidates are asking their siblings to be their campaign manager, which means Uly and Sallie are suddenly adversaries in an election where the stakes are on the rise. (Note that the novel contains scenes of gun violence.)

A teenage romance set in the age of Covid, “Hello (From Here)” begins just hours after California announced shelter-in-place orders, when Max and Jonah meet while last shopping. minute in quarantine. This chance encounter creates a bond between the two, but they must determine if they can establish and maintain a relationship at a time when distance is a way of life.

‘We are not broken, ‘by George M. Johnson (Little, Brown Books for Young Readers, September 7)

George M. Johnson, (“Not All Boys Are Blue”) is back with a new memoir about Nanny, the grandmother who raised them (the author uses the pronouns them / them). In “We Are Not Broken,” Johnson explains how Nanny, a prominent “All Boys” figure, held the family together and provided the anchor she needed to grow up black in America.

August Greene is a transgender teenager whose conservative parents don’t accept him and want him to live as a girl. When he enters New York’s School of Performing Arts, he thinks his dream of becoming an actor is about to come true, but to go, he needs the approval of his mother and father – the approval they are prepared to give. one condition: August must promise not to become the boy he knows he is meant to be.

Alma is a half-Chinese, half-Jewish teenager who matured in the 1980s in New York City. When her parents divorce, her friends move away, and she begins a flirtation with a boy in her neighborhood, her whole world falls on its axis, and Alma must find out who she is in this next stage of her life.

‘Not here to be loved, ‘by Michelle Quach (Katherine Tegen Books, September 14)

Eliza Quan, a hard-working student journalist, introduces herself as the editor of the school newspaper, and she’s great. But on voting day, Len DiMartile, who joined the newspaper just a year ago, enters the race – and wins. Distraught, Eliza writes a private essay about misogyny and the frustration of being ignored for a job she has worked hard for. But when the play mysteriously goes out without her approval and goes viral, Eliza is pushed into a much larger conversation.

Derry and her eight sisters have special powers, a secret they keep as they live in a world where “witches” are feared and killed. To stay safe, they live in a house on the edge of a forest under the direction of Frank, a dark man who develops their abilities, yes, but also severely restricts their freedom – in order to protect them, he says. One of their many rules is never to go into the forest, but when the Derry sisters begin to disappear, she is forced to venture into the forbidden territory.

‘When we do, ‘by Elisabet Velasquez (Dial Books, September 21)

This verse novel follows Sarai, a Puerto Rican college student who grows up in a gentrifying Bushwick, as she grapples with the serious truths of her situation – poverty, mental illness, how she fits into her heritage.

In “The Other Talk,” Kiely hopes to have a frank conversation with teens about racism, but from a new perspective: In addition to explaining the ways in which racism harms people of color, he wants to explore white privilege. Because, explains Kiely, “although a lot of us talk about racism, we just don’t talk about being white and all the privileges we get because we are white.

To finish high school, Gio needs to stay focused and keep his grades, but that’s easier said than done: he struggles with anxiety, a preacher dad who denounces his bisexuality and feelings for a newborn baby of his basketball team named David. To complicate matters, Gio’s mom returns to the scene after abandoning him years ago, wanting to reconnect.

The first book in a new series, “Beasts of Prey” follows two teenagers in the fictional town of Lkossa: Koffi, a indentured servant who works at the Night Zoo and dreams of freedom; and Ekon, a warrior in training. When a monster known as Shetani attacks Lkossa, Koffi hopes to capture the beast to pay off his debts, while Ekon wants to kill the creature and prove his strength. Despite their competing goals, the two team up – but when it comes to the beast they rely on to change their destinies, all is not as it seems.

When four teenagers unearth a time capsule their parents buried in the ’80s, they think it’ll be a fun way to revisit the past. Instead, they stumble upon what appears to be evidence of murder, including a bloodied knife and a note that says “I didn’t mean to kill anyone.” Suddenly they find themselves playing in a dangerous game that began a generation earlier.