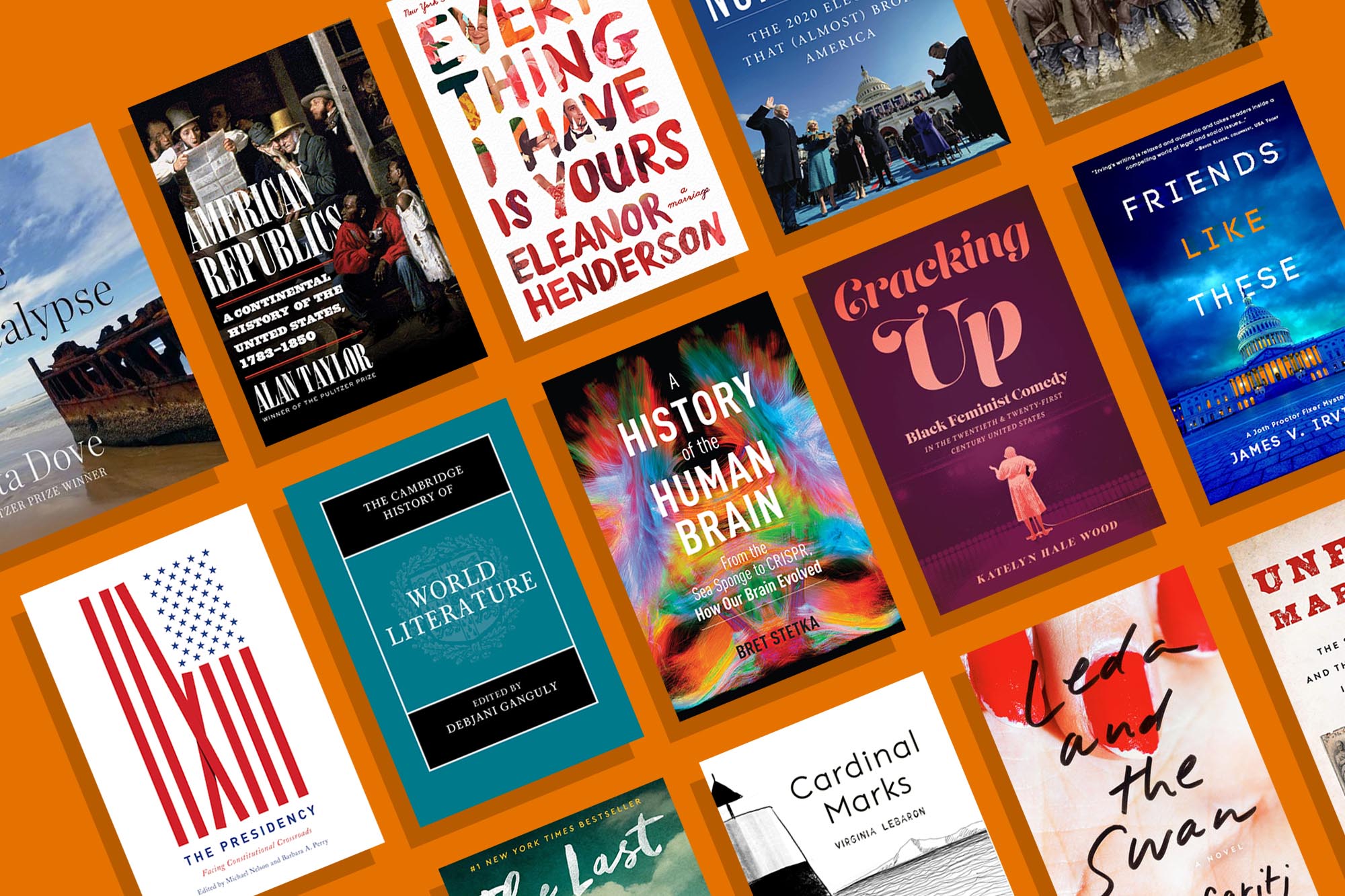 From mystery briefs, work tips to analysis of the 2020 election, faculty members and alumni at the University of Virginia have published, or will soon publish, books that appeal to a wide range of tastes and subjects.

Laura DaveThe fifth book, “The Last Thing He Told Me,” has been on the New York Times bestseller list since May – it’s not a new experience for this 2003 MFA alumnus in Fiction Program. creative writing from the English department. Two other novels, “Eight Hundred Raisins” and “The Divorce Party”, were also bestsellers.

This latest story, called “captivating” by one reviewer, follows the “mystery of a woman who thinks she has found the love of her life – until it is gone.”

Reese Witherspoon selected the novel in May for her book club, and the actor will also co-produce a scripted adaptation for Apple TV, with Julia Roberts co-producing and starring.

Rita Colombe, creative writing teacher Henry Hoyns, will see his first volume of new poems in 12 years, “Playlist for the Apocalypse,” released on August 3. [Although it’s not in this book, Dove’s poem, “Daffodil,” which she read for 2021 Final Exercises, can be heard in this video.]

The publisher, WW Norton, describes these poems in which “Dove investigates the wavering moral compass that guides the democratic experiences of America and the world.” Whether portraying Venice’s first Jewish ghetto in the 16th century or Black Lives Matter, this extraordinary poet never fails to connect the great feats of history to the triumphs and tragedies of individual life – the seething resentment of an operator. elevator, the exuberant mambo of an octogenarian, the biting humor of a philosopher cricket.

James V. Irving, a former AVU student turned lawyer, took notes when he first served as a private investigator in the 1970s. He released the first of a planned trilogy, the thriller “Friends Like These,” in November 2020. His second book with the main character, lawyer Joth Proctor, “Friend of a Friend”, is now available.

Virginie LeBaron, assistant professor of nursing, focused on oncology and palliative care in her medical profession. His first book, “Cardinal Marks”, is a collection of poems.

“These poems explore the territory between guilt and forgiveness, childhood and adulthood, and perhaps most importantly between life and death,” wrote Lisa Russ Spaar, poet and professor of creative writing at the ‘UVA.

Debjani ganguly, professor of English and director of the Institute of Humanities and World Cultures at AVU, has edited a new book, “The Cambridge History of World Literature,” to be released in July, featuring creative works and new perspectives on selected authors and regions of the world. world.

Former student Eleanor HendersonThe memoir for, “All I’ve Got is Yours,” on her longtime marriage and her husband’s chronic illness, will be published in August by Flatiron Books. Henderson, who received his MFA in fiction writing in 2005, has published two novels and numerous essays and short stories. She is the Robert Ryan professor of humanities at Ithaca College in New York, where she chairs the writing department.

Safiya Sinclair“How to Say Babylon: A Jamaican Memoir” is due out soon and reveals his upbringing in the patriarchal culture of the Rastafarian religion. She received her MA in Poetry from the Creative Writing Program at AVU in 2014 and her PhD. in Literature and Creative Writing from the University of Southern California. His first collection of poems, “Cannibal”, published in 2016, won several awards.

Anna caritj is a former AVU student and author of the first novel, “Leda and the Swan”. The editor writes: “With a keen eye, Caritj describes how violence can shake a [college] community while questioning the insidious seeds that produce it, often hidden in plain sight. In this way, Caritj delivers a novel desperately needed for a current cultural climate that counts with urgent and long overdue questions around sex, power and consent.

The book “explores the economic life of enslaved people, not as landlords or enslaved workers, but as active participants in their local economies. “Unfree Markets” provides the most comprehensive account to date of the strategies enslaved people used to create their own trading networks, from the colonial period to the civil war. The time and energy that enslaved people invested in their own economic ventures, however, did not allow them to secure their freedom.

The portrait of the United States that emerges is not flattering, as the editor’s description puts it: “Taylor highlights white supremacy, sexism, slavery, the miseries of industrial capitalism, ethnic cleansing. Native Americans and the atrocities committed by American soldiers during the Mexican War. . This elegantly written and thoughtfully argued study shows just how rocky and explosive the American project was from the start. “

In “The Road Less Traveled: The Secret Battle to End the Great War, 1916-1917”, Philippe Zelikow, Professor of History White Burkett Miller and Professor of Governance J. Wilson Newman at the Miller Center of Public Affairs, discusses the possibilities of peaceful negotiations that could have ended World War I earlier, saving millions of lives – but no ‘have never been undertaken.

If readers don’t have enough of the 2020 election, they can check out this Miller Center’s book. Michel nelson, a non-resident principal investigator, and Barbara perry, Gerald L. Baliles Professor and Director of Presidential Studies. The duo edited “The Chairman: Facing Constitutional Crossroads,” published in April by the University of Virginia Press in the Miller Center Studies series on the presidency.

Katelyn Hale Wood, Assistant Professor of Drama, takes a close look at black feminist comedy in her new book, “Cracking Up: Black Feminist Comedy in the 20e and 21st Century of the United States. She explores the work of Jackie “Moms” Mabley, Mo’Nique, Wanda Sykes, Sasheer Zamata (an AVU alumnus) and other black artists to show how they created essential elements of feminist, queer and protest protest. anti-racist.

Jim detert, Professor John L. Colley of Business Administration at the Darden School of Business, and his book, “Choosing Courage: The Daily Guide to Being Courageous at Work”, have garnered positive media attention since the book’s publication in the month latest by Harvard Business Press review. (See this Darden item and this UVA today Questions and answers in January 2019 before the end of the book.)

The editor describes “Choose courage “ as providing “the moral imperative and research-based tactics to help you make better use of your courageous instincts at work”.

In a recent interview with Associations Now, Detert said that courage is an asset that must be cultivated. Courageous staff “just solve problems faster. They look for opportunities before they are lost or a competitor takes them, ”he said. “There is also a high level of employee engagement and engagement. It ranges from people who make fewer mistakes, people who work harder, people who are more creative, to people who engage in organizational citizenship – their willingness to help, their willingness to go above and beyond. .

Bret stetka, a 2005 medical school alumnus and neuroscientist, has worked as editor and editor of the Medscape medical news website since 2007 and has written for lay audiences in media outlets such as Scientific American, The ‘Atlantic and NPR. His new book, “A History of the Human Brain: From the Sea Sponge to CRISPR, How Our Brain Evolved,” explains how our early Homo sapiens ancestors survived and where our evolved brains are heading.

About 125,000 years ago, humanity was on the verge of extinction when a dramatic change occurred, according to Stetka; Homo sapiens in Africa began to follow the tides and eat the oysters nearby. In no time, they had retreated from the brink of extinction. What saved them?

In “A History of the Human Brain”, Stetka answers this question, showing exactly when and how the human brain evolved to shape who we are today. The book explores the growing concept of epigenetics as well as technologies like CRISPR that allow scientists to manually modify our own genetic code. The biological and ethical questions are vast: what will happen next? Could the human brain’s evolutionary path lead to its own replacement?