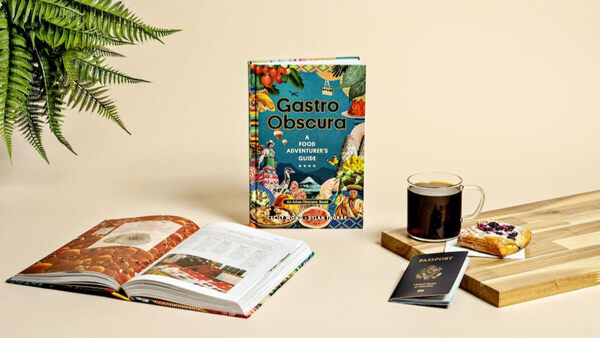 This article is adapted from the October 9, 2021 edition of Gastro Obscura’s Favorite Things newsletter. You can register here.

In 2017, I joined Atlas Obscura. Gastro Obscura did not yet exist and I was given the dream task of building a team and launching a new original culinary publication. Since then, our team of food enthusiasts have tried to share the wonder and curiosity we feel as we learn about the history, culture, and surprising stories behind the way we eat and drink.

From day one, our big ambition was to publish a book. Like the book Atlas Obscura, it would be big and beautiful and would take readers around the world. And as you probably know (from our many announcements!), This book is out today.

The book is titled Gastro Obscura: Gastronomic Adventurer’s Guide, and I have it right now. You can order it online or find it in most bookstores.

Today, however, I would like to invite you into the kitchen and introduce you to the many cooks behind this project. This is because in addition to the book’s co-authors – writer and novelist Cecily Wong and Atlas Obscura co-founder Dylan Thuras – the entire Gastro Obscura team contributed, as well as talented freelance writers. . And working in that crowded kitchen was both a challenge and a pleasure. Let’s listen to the team.

Rachel Rummel: The Ramos Gin Fizz. While extremely impractical to make (it’s hand-shaken to an almost whipped state), this silky, floral cocktail survived Prohibition and continues to thrive in New Orleans. In addition, the entrance was beautifully illustrated in the book. The almost mythical softness really stands out.

Sam O’Brien: I loved discovering fruits, vegetables and legumes that taste the same as other foods: peanut butter, chocolate, ice cream … Yes, cooking can open up a world of flavors, but nature alone offers a varied and surprising menu! All members of the Gastro team now have a list of botanical buckets. It’s basically a race to see who can hunt down the peanut butter fruit first.

Dylan Thuras: One of my favorite contributions has been learning and writing about the history of presidential cheese. The idea that the White House is just smeared with cheese is so funny to me. I also really enjoyed learning about brewing beer in North Korea and am desperate to try some of the steamed beers brewed there – it’s a pretty specific style of brewing!

Anne Ewbank: If there’s one thing I love more than food, it’s prehistoric megafauna. And if you go to page 358, you will learn more about weight loss. These two to four ton sloths loved fatty avocado and even indulged in an occasional little genetic engineering, turning them into the biggest fruits we know now through the simple technique of eating avocados, passing them through. their huge digestive system, and poop seeds across Central and South America.

What is one thing you ate or drank while working on Gastro Obscura that you didn’t like?

Cecile: Perhaps the most surprising find is that I love Jeppson’s MalÃ¶rt, which is considered one of the worst spirits in the world (even by the people who make it!). Something I didn’t like was the chocolate hummus. It’s not in the book, but hummus shouldn’t be made with chocolate.

Dylan : I recently tried what I would call a “tongue drug”, an herb known as gymnema sylvestre. It robs everything you taste of its sweetness. So it makes beer taste great like garbage. Honey tastes like glue. It was an amazing experience to see what a world without sweetness would look like. The answer is NOT GOOD AT ALL.

Anne: Businessmen of the 1950s were known to keep scotch in their desks, but Sam O’Brien proudly displayed a bottle of MalÃ¶rt on his. For research purposes, as no one would drink MalÃ¶rt for the sake of it. [Ed. note: See Cecilyâ€™s answer.] I still sometimes remember the taste and the chills.

Sat : Jeppson’s MalÃ¶rt was anâ€¦ intense experience. I remember someone saying that drinking absinthe flavored alcohol was like having an angry ghost stuck in your throat. But if a Chicago resident offered me a chance, I wouldn’t turn it down. You don’t want to be rude.

How the sausage was made

It’s a clichÃ© that no one wants to know how sausage is made. But I never believed it! Gastro Obscura even has a series of articles called How the Sausage Gets Made. Here are four glimpses of the making of the book.

What is your favorite memory of making the book?

Cecile: While writing about the Sourtoe Cocktail, Dylan provided me with a copy of the self-published autobiography of Captain Dick, the man behind the incredible tradition of drinking a cocktail topped with a severed human toe. It was the funniest extracurricular reading I have ever done. I also loved it when the whole Gastro team did a Tim Tam Slam; it’s harder than it looks!

Marc Haeringer: See Cecily on a Zoom call wearing a hat fashioned from the book layouts.

Rachel: I applied for the first Gastro Obscura Fellowship using Vietnamese egg coffee writing sample, which ended up in the Asia chapter. I couldn’t know it at the time, but my travels ended up being part of the book.

Anne: Seeing the first mockup pages was such a thrill. We had been working on the book for two years by then, and that’s when it started to feel real.

Gastro Obscura covers the world’s most wonderful foods and drinks.

Sign up for our email, delivered twice a week.