Spring has arrived and I truly believe that nature offers a world class spectacle in Adelaide. Of course, we don’t have a monopoly on shards of golden acacia or bare branches sprouting from pink and white blossoms. But our golden blue sky is a local specialty.

What does this have to do with books or bookstores? Well, at Imprints we just did our equivalent of a spring cleaning – an inventory – to free up space for the annual crop of big new books that begins in September. And just like the first big post-winter weekend in the garden, all that squatting and stretching to maintain the shelves destroyed my hibernating muscles. Fortunately, while I recovered with my feet in the air, I had a lot to read.

The biggest book of all this year, of course, is Sally rooney‘s Beautiful people, where are you (Faber), a novel you might have read something about, anywhere Vogue To The New York Times, to Twitter, where numerous brawls over whether the hype is deserved have been hosted. And this is where I tell you, as a good bookseller, that it’s available in both paperback and hardcover (the latter with a bonus short story from Rooney), and for a limited time, you can get the hardcover book for $ 27.99 (RRP $ 34.95).

Normal people, Rooney’s second novel, was a worldwide phenomenon, spawning an equally popular streaming series. As part of a dry-witted literary romantic comedy, she forensic analysis of her characters’ insecurities around social, family, and social or other success, while exploring mental health and family dysfunction. . Serious terrain traversed with a deceptively light touch, the kind that – well done – seems simple.

Beautiful people, where are you is both a throwback to Rooney’s first two novels – beautiful young people talking intensely and seriously about love, friendship, the end of the world and Marxism while navigating their mutual attraction and obstacles in their way. way – and something new. Alice and Eileen, best friends in their early 30s, communicate primarily through long emails that oscillate between personal and luxurious digressions about the state of the world.

Alice, a breathtaking novelist who hates her fame, has moved to a small Irish seaside town (following a nervous breakdown), where she meets and goes out with Felix, a warehouse worker not very impressed with it. Eileen, editor-in-chief of a literary magazine in Dublin, reconnects with her childhood crush and longtime friend Simon, a left-wing Catholic political adviser, but is hesitant to turn their genuine bond into a romantic relationship.

In this new novel, Rooney adopts an omniscient third-person narrative style, standing at a distance from her characters and observing them primarily from the outside, as an outsider might, rather than intensely inhabiting their perspectives as she does. ‘did in his first two novels. The novel comes to life in its final third, when the characters come together in the same house, their dynamic crackles and spits, and dialogue – Rooney’s greatest strength, in my opinion – takes over.

While bookstore conversations are dominated by the Rooney’s right now – and a very pleasant exchange of opinions takes place – there are other great books to discuss as well. 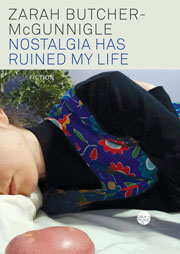 The one I really liked, which might appeal to fans of Rooney’s dysfunctional young women, with its dark wit and hyper-sensitivity to material conditions, is a weird, fragmented, self-fictional little novel by a young New Zealand writer, Zarah Butcher-McGunnigle, Nostalgia ruined my life (Giramonde). The narrator is unemployed, bored, depressed and chronically ill, and her love life is horrible. Yet this book is one of the funniest things I have read in a long time. An example: “My father is remarrying… He asks me what I did recently and I say nothing because I am very depressed and anxious. He says, ‘Oh okay, well, I’m thinking about renovating the house because there’s no flow.’

During the inventory, I briefly followed a colleague around the store, reading excerpts out loud to him. (Sorry, Ben.) In bed that night, army of chamomile tea, I read passages aloud to my husband, who laughed uncertainly and said, “It really is. weird. Casually horrible, delivered in a conscious tongue-in-cheek, this book won’t be for everyone, but I highly recommend it nonetheless. For me, it’s humor both as a coping mechanism and as a means of awareness, masterfully used. I will read whatever this author writes next.

Another strange and excellent book that I inflicted on my husband in sections, because it deserves to be talked about, is Puff Piece: How Philip Morris Set Vaping On Fire (And Burnt The English Language) through Jean Safran (Penguin). Safran, who first became known as a documentary filmmaker, is often compared to Louis Theroux and Jon Ronson – including by me. I have heard him speak publicly, along with Ronson, about this comparison, and the three men recognize echoes of their common interest in investigating strange worlds and plots, real and imagined, using dry observational humor, a relentless persistence and themselves as non-threatening (and thus disarming) investigators. 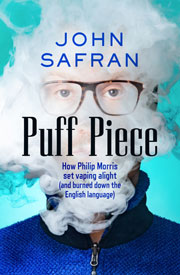 Ronson, one of my favorite writers, is actually the closest comparison to the page. The two writers structure their books around a mixture of discovery – the central axis – and comic digressions that often turn out to be more meaningful than they appear, advancing the story or adding an alternate perspective. In the case of Safran, these digressions often feature the iconic priest and social justice activist, Father Bob, or his local rabbi.

In Piece of puff, Safran sets out to investigate how Philip Morris continues to navigate and evade cigarette regulations, with behind-the-scenes maneuvers, lobbying, shell companies and organizations, and wickedly masterful Orwellian language hijackings. Did you know that Philip Morris is a major player in the electronic cigarette market? But unlike vaping (which has its own controversies), the company’s IQOS is loaded with HeatSticks, small cylindrical objects filled with tobacco and nicotine that look exactly like cigarettes. And, like cigarettes, produce tar. Which is the main cause of lung cancer. However, with this product, Philip Morris is now renaming itself vigorously anti-smoking (the HeatSticks do not produce smoke, they produce steam).

This is a truly revealing look at the industry, the parallel universe of vaping (and how they are connected through lobbying) and – one of Safran’s central concerns – how the general public has been. distracted from attention. Safran is furious at how “the new moral code” means the zeitgeist cares more about identity language than how companies use language to evade regulations designed to prevent them from poisoning us. And while I haven’t always agreed with his specific arguments in this thread, I think the larger point is worth exploring. Maybe because, like Safran, I grew up as Naomi Klein’s Gen-X sidekick No logo – yet now not only do I own three pairs of Nike sneakers, but I tend to shrug my shoulders and say that all big companies are horrible, rather than thinking about how we might demand change. I appreciate that I have to be careful. 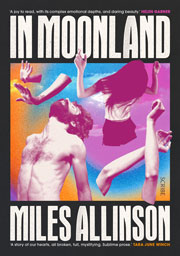 Another new book that draws on the idealism of past generations is In the Land of the Moon (Scribe), the superb second novel by the Melbourne author Miles Allinson, whose debut in 2015 Animal fever has won or has been selected for multiple awards. A novel in several parts, spanning three generations and from multiple points of view, In the Land of the Moon is a meditation on family, emotional heritage, memory and belief. It’s also about the power of the stories we tell ourselves about who we are and where we come from: how, rather than reflecting objective truth, they can shape us, trap us and set us free. And although its ideas and structure are complex, Allinson’s prose reads with the ease of a knife through hot butter, at times echoing the crisp and ironic vulnerability of Helen Garner, who calls this book ” a pleasure to read ”.

Joe, mired in his precocious fatherhood, becomes obsessed with finding the truth about the life and death of his charismatic, episodically violent, but loving father (the latter being a suicide or a dramatically reckless accident) – while alienating himself more and more his wife and young daughter. In the late 1970s, in the months leading up to meeting Joe’s mother, Vincent was forever transformed by an intense and disturbing experience in India as a member of a sect (an actual sect, led by Bhagwan Shree Rajneesh), where members were invited to to unleash the “total self” no matter what that might be. And in the near future of environmental collapse and continued technological advancement, where hope and idealism are lacking, we meet Joe’s now adult daughter Sylvie.

The mosaic of interactive stories and timelines works wonderfully, in a way that will reward (but not require) re-reading, to further trace connections and contradictions. It is also a complex, nuanced and fascinating exploration of masculinity, through fathers and sons, and the tender male friendships.

While Allinson’s narrators are cynical and disillusioned, the novel is compassionate, cherishing the imperfect humanity of its characters. As Vincent, the figure who weighs the most on the novel, approaches the cult, his thoughts “swirled in a general feeling of insufficiency and rage that followed him everywhere. It was as if he was strolling by the edge of the sea. his own life, waiting for the real thing to begin. So maybe that was it, he had thought, this ashram. The real thing. “

Jo Case is a bookseller at Booksellers on Hindley Street and an associate editor at Wakefield Press.

InReview is a revolutionary publication providing local and professional coverage of the arts in South Australia. Your tax-deductible donation will go directly to support this independent, not-for-profit journalism and art critic.

This article is supported by the Judith Neilson Institute for Journalism and Ideas.