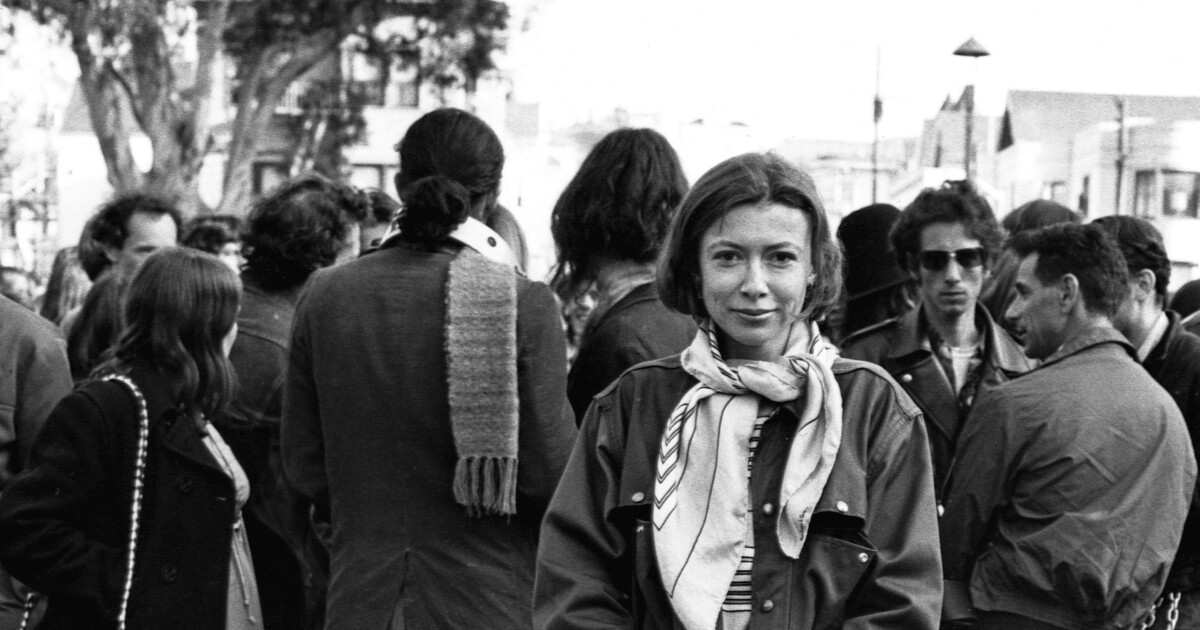 I had known Joan Didion by chance for many years when I asked her to join other artistic icons, including Frank Gehry, David Hockney, and Clint Eastwood, to chat with me for my book “State of the Arts: California Artists. Talk About Their Work ”(2000). What, I wanted to know, had attracted so many of the country’s most creative people to move to a state notorious for fires, floods, earthquakes, and other more psychological disasters? ?

It was something that she, from California, was eager to talk about. And so one day towards the end of the 20th century, I sat in her living room in New York for several hours as she talked about where she was from. But first, she urged me to look around, pointing out the stillness of the room’s pastel-colored walls and paintings as she unfolded the competing California themes – possibility and catastrophe – in the same. surprisingly balanced and almost perfect sentences that distinguished his writing. .

Long regarded as the state’s columnist, she once described it as the place “we lack continent”. This is where Joan Didion, who died this week at 87, began her story – with the moment her ancestors came to the end of the country.

I wanted to be a writer and my mother encouraged me. My father didn’t discourage me. We just haven’t had that discussion. I learned to type by typing other people’s fiction. I did a lot of Hemingway. You have discovered how sentences work. I got really quick as a two-finger typist typing Hemingway’s short story, “Hills Like White Elephants” and the whole beginning of “A Farewell to Arms”.

I went to Berkeley in the spring of 1953. I was editor of the literary magazine and took whatever writing classes there were. Then I put off writing the fiction until later because it was so clear that everyone had already done it. You were unlikely to be as good as Henry James.

I thought I wanted to be a writer or an actress. It was undefined. I was a guest editor for a month at Mademoiselle magazine in New York when I was a junior at Berkeley, and the next year I won a competition at Vogue and they gave me a job in New York. At the moment when Jean [Gregory Dunne] and I got married in 1964, I had published “Run River”.

Once we decided to move to California, Los Angeles seemed the obvious place because a) we had this demented idea that we could make a living writing for TV and b) I was depressed in San Francisco. I changed the idea of ​​the novel I hadn’t written to another idea, which I wasn’t writing, which turned out to be “Play It as It Lays”. But when I finally started writing this, I wrote pretty much everything in one session.

We rented a house without a view. I put an ad in the newspaper, and got a response from this couple who had a huge property in Portuguese Bend. We paid very little rent, but part of the deal was that the exteriors could be used for movies. I remember a Chrysler swept away because they were spinning a Chrysler commercial in the waves and didn’t believe me when I said the tide was rising.

My family did not see California as an easy place to live, and it is not an especially easy place to live. A place like Sacramento that gets flooded every year isn’t particularly easy. Los Angeles is not easy. It is easy to bring your clothes to the dry cleaners and there are large supermarkets. But think about fires. You don’t need winter clothes, but at the same time your house can disappear.

I think people who grew up in California have more tolerance for doomsday notions. However, mixed with this tolerance for the apocalyptic notions in which the world is going to end in dramatic fashion, is this belief that the world cannot help but get better and better. It’s really hard for me to believe that everything isn’t getting better, because thinking like that was so part of being in California.

You thought if you bought a house, of course, it would increase in value. If you were to buy real estate, it would of course increase in value. Of course, you could sell it for a subdivision. And it was just on the crudest level. But you really believed the city was going to grow for good. The dam would help the river. All these kinds of fixed misconceptions. But there they are, fixed.

Extract from “State of the Arts: California Artists Talk About Their Work”, © Barbara Isenberg, 2000.