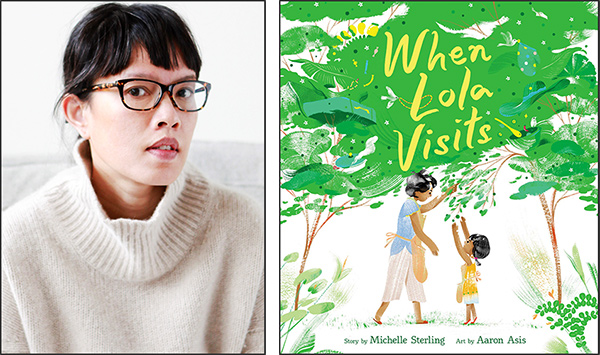 Photographer, speech therapist and culinary connoisseur, Michelle Sterling is no stranger to mingling her artistic eye with her various passions. “My two loves at university were languages ​​and art,” she says. “I majored in linguistics and studied in Barcelona for a year. When I was younger I wanted to be a travel writer or photojournalist, but it never worked. “

Hailing from Illocos, in the northwestern Luzon region of the Philippines, on her mother’s side and Manila on her father’s side, Sterling is delighted that people of Ilocano descent are reading her book. Growing up in the United States and currently residing in Southern California, she explains that she has never seen a fictional picture book featuring the different regions and people of the Philippines. “I wanted to show people that even in a small country like the Philippines there are so many different groups and languages. “

Citing books by Beverly Cleary and the work of Filipino authors such as Mae Respicio as stories that have marked her, Sterling says she hopes her book will resonate with present and future generations. “There have been so many meaningful and poignant Asian and Asian American books published over the past two years, and I would love to see more joyful and humorous stories.”

A lover of the picture book shape, Sterling wrote about children’s books on her blog Avery and Augustin for over a decade, but initially she hadn’t considered writing her own book. It wasn’t until the summer of 2018, when she walked past a bowl of peaches in her kitchen, that the debut of When Lola visits (HarperCollins / Tegen) has started to take hold.

“[The fruit] smelled so good and made me think of all the different smells that I love during the summer, ”says Sterling. “And then I thought, could this be a picture book about a Filipino American family?” I knew how difficult it is to find an agent, and you are never assured of publication. But because I wanted a story about a Filipino American family, I thought to myself, “I’ll do it.” “

Sterling set out to find an agent, browsing a number of websites, but encountered early setbacks. “It’s hard [selling only a manuscript] if you are just a picture book writer because all [the agents] are looking for illustrators or author-illustrators, ”she explains. “A lot of the work of illustrators will be picked up, but maybe not as much by various writers. “

Steven Malk of Writers House passed his manuscript on to another Writers House agent, Andrea Morrison, which ultimately led to their partnership.

Finding an illustrator was the next step. Filipino illustrator Aaron Asis stood out for both Morrison and Sterling. “I wanted someone who would capture the warmth and hospitality of Filipino culture,” says Sterling. “I felt like [Asis] exuded that. Her work is carefree but has a natural warmth at the same time. And I feel like it’s so representative of our culture.

When Lola visits is the story of a girl lola (grandmother) visiting the United States from the Philippines, as well as summer activities and food that the family shares. Inspired by her own childhood memories with her lola and the memories she hopes to create with her family, Sterling has decided to present Filipino dishes that are not very common and that encapsulate the history of Filipino cuisine.

Sterling cites appreciation for Filipino food historian Doreen Fernandez’s book Tikim: Essays on Filipino Food and Culture. “I almost included it in my dedication,” she says. “I wanted foods that represented different aspects of the history of Filipino cuisine. Suman and sisig are more recent creations.

Sterling also wanted to surprise readers. “That’s why I chose mango jam,” she says, along with calamansi pie, a variation of American lime pie. “For me who has spread [showing the pie] is really important. [Fernandez] talks about the number of cultures that have left their mark on the Philippines, but Filipinos are able to “philipinize” the food they bring. [As Filipino Americans] we live with both cultures in our lives. Having this pie on July 4th is like being in a new country, but you can still celebrate your house. It’s a rapprochement of cultures, a bit like what we do as immigrants.

The buzz for Sterling’s pound continues to grow: the first print run is sold out and a second is in the works. “Oh my God, this is so crazy,” she exclaims, recounting how some independent Filipino bookstores sold in the first two days. She also describes how the Filipino Storytime Seattle organization collaborated with Chef Melissa Miranda of Musang, a popular local Filipino restaurant, for a virtual read aloud and take-out kit to make the featured cassava cake and mango jam. in the book.

Sterling’s second picture book, The year of Maribel, is scheduled for winter 2023. She also has an idea for a chapter book and is ready to collaborate on a comic, if anyone asks.

“For now, I’m mostly hoping to write as many picture books as possible,” says Sterling, laughing.

A version of this article appeared in the 6/28/2021 issue of Editors Weekly under the title: Flying Starts