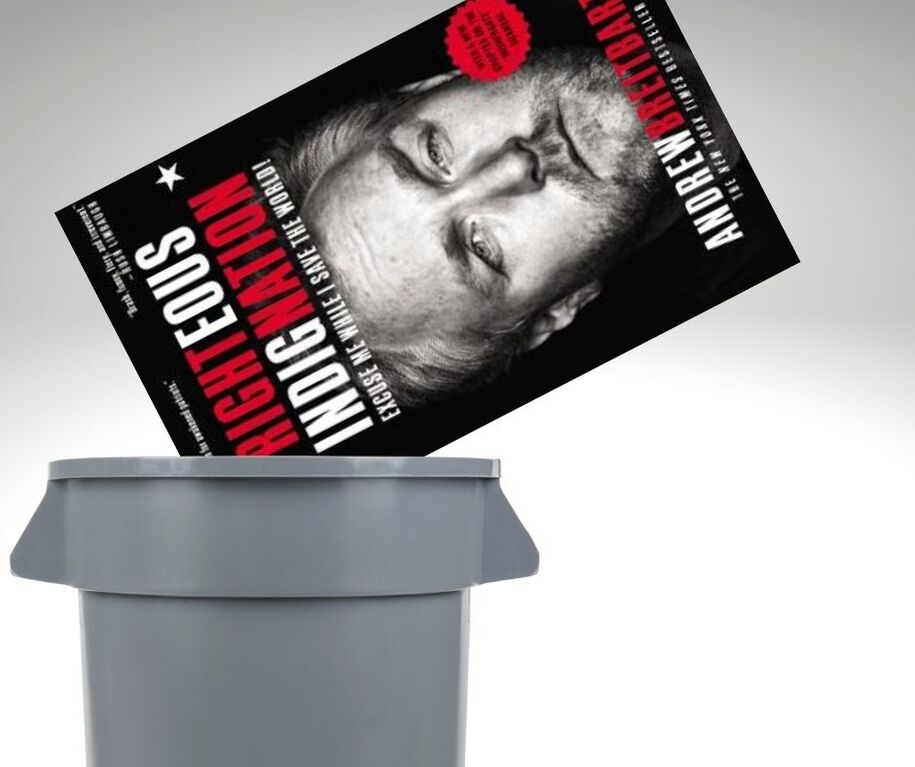 Breitbart is the unreliable classic narrator. Throughout the book he believes he is showing some reality through his anecdotes, but because he comes forward with such a sense of persecution, exaggeration, and self-glorification, he actually shows the opposite.

He devotes endless pages to portraying himself as the triumphant hero of trivial battles. He endlessly and desperately tries to pump his image through the reflected glory of B-level Hollywood stars. His whining and rant betrays such a persecution complex that it almost becomes embarrassing to read.

Now, I like the unreliable narrator technique as much as the next guy, but the editors at Breitbart really should have made him realize that while it’s an interesting technique in fiction, it’s a REALLY BAD TECHNIQUE FOR LA. NONFICTION. Its editors at least inadvertently saved it from one of its worst revelations, but the pre-edit of the original text can be found in advanced reader’s copy.

One of the main themes that Breitbart puts forward in his book is the following:

The left does not win its battles in the debate. It’s not necessary. In the 21st century, the media are everything. The left wins because it controls the narrative.

Here’s what Breitbart has to say after offering a pot history of early 20th century leftist philosophy in Europe:

Again, where am I going with all this philosophical jabberwocky? Well, all those boring, bleating philosophers might have been forgotten like so many Marxist theorists have, but the rise of Adolf Hitler prevented it. With Hitler’s rise, they had to flee (almost all – Horkheimer, Marcuse, Adorno, Fromm – were of Jewish descent). And they had nowhere to go.

Except the United States.

Yes, it’s true. If only Hitler had been a little quicker on this, America could have been saved from the polluting influence of those damn Marxist Jews!

Two pages later, Breitbart says this about these philosophers:

Yes, Breitbart wished he could turn back time and finish the job Hitler botched. Except OOPS! Guess his editor thought it was a little, ummm, indelicate. The quote above is what Breitbart originally wrote as it appears in the advanced reader’s copy. Here’s how the passage was edited for the final published version:

If I could go back in a time machine, I would go back there to kick those malcontents in their shins.

Did I say strangle? No, obviously what I meant was to kick them in the shins. I’m stupid!

To be fair, some of Breitbart’s best friends are Jews. Or at least some of the people he admires are. He speaks favorably of Irving Kristol and Joe Lieberman. He misses the days when people like Abbie Hoffman and Lenny Bruce weren’t afraid to stick with the man.

The only thing is that he does not specifically identify any of these people as Jewish, as he does with the philosophical enemies mentioned above. And he also goes out of his way to identify as a Jew another person whom he describes as an enemy of all that is good:

Let’s start by noting who Saul Alinsky was. Alinsky was an avowed Communist dedicated to installing Communism in America from within, using the most intelligent tactical means he could conceive of. He was born in Chicago in 1909 to Jewish parents, and like his counterparts at the Frankfurt school, he quickly migrated to Marx. [my emphasis]

Oh, except OOPS! Again, this is how Breitbart originally wrote it and as it appears in the advanced reader’s copy. But once again, his editors stepped in and removed this free reference to Alinsky’s legacy. In the final version of the book, the sentence reads “[H}e was born in 1909 in Chicago.” The “Jewish parents” have vanished.

One more curious example. Near the end of the book, Breitbart goes all false modesty in the following passage, and out of all the possible analogies available to him, chooses one that is rather bizarre:

At the end of the day, I know I’m not an aspiring political pundit, that I don’t consider my voice any greater than my neighbor’s voice, that my opinion on gay marriage is no more important than that of someone who is gay and is in a committed relationship, and that my thoughts on marijuana legalization are no more important than those of an orthodox Jew who has a deep problem with illegal drugs.

OK, what corner of his mind did he pull that idea from?

Now I’m not trying to paint Breitbart as some sort of raving anti-Semitic neo-Nazi.  All I’m saying is that, when left to his own devices, the Unreliable Narrator that is the writer Andrew Breitbart seems to toss up rather frequently some unconscious antipathy towards the Jews.

Maybe he just has some personal issues to work through. According to his Wikipedia entry, Breitbart was adopted by a Jewish family, but that he is ethnically Irish by birth.

So fine, Andrew, if you have some family issues to work though, please discuss them with the psychotherapist of your choice.

But do us all a favor and don’t impose your bullshit on the rest of us.

And here is my comment addition to that old diary:

And did you know that…

Breitbart’s wife is the daughter of Orson Bean! Yes, THAT Orson Bean! He makes sure to impress us with that fact many times throughout the book!

But that’s what’s so fun about reading his book: how he inadvertently reveals things about himself.

Another of my favorite examples his the way he expresses regret over his many youthful indiscretions of drinking, drugs, blowing off school, and dabbling in liberal politics. Two things he doesn’t express regret over? Getting laid (Breitbart loves to tell us about how he got laid in college). And this:

“I soon discovered that having sixty or eighty tax-free dollars in my pocket after every [pizza delivery] change has only reinforced a growing sense of freedom, of independence.