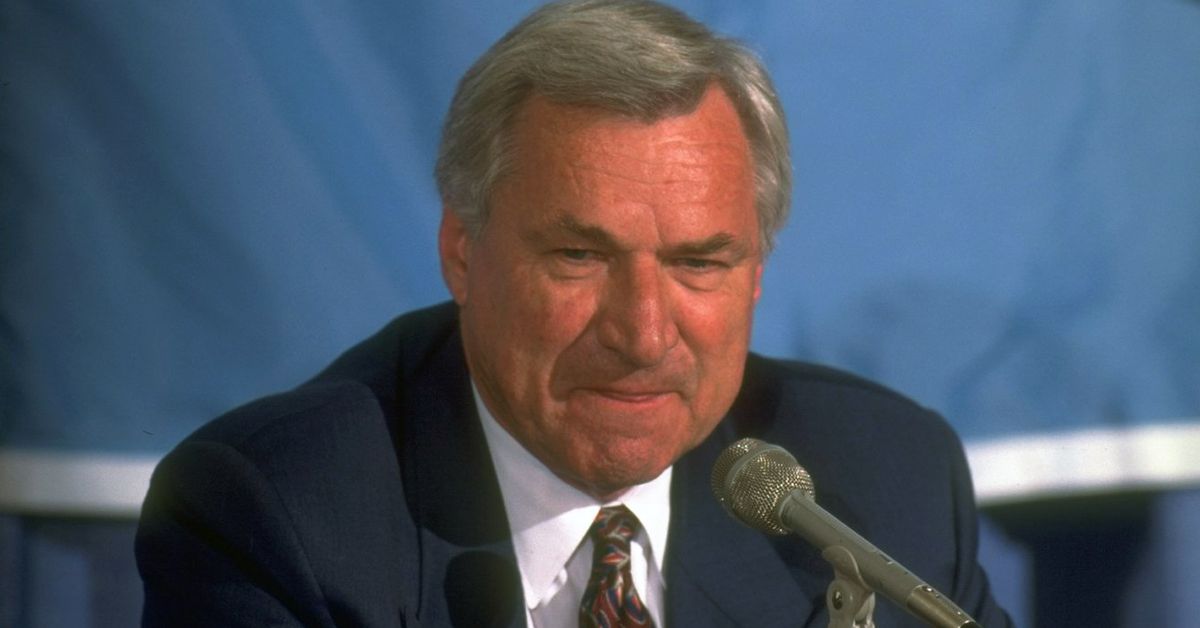 For longtime UNC supporters, John Kilgo provided much-needed content for Carolina in the days before the sports media explosion in the Internet age.

With a friendship that began early in Dean Smith’s career at UNC, Kilgo supplemented his existing media career by hosting the weekly Carolina basketball radio and television shows, and then producing news bulletins for the ‘UNC and Carolina Blue magazines.

While searching a few boxes recently, I found a copy of John Kilgo’s Carolina Basketball, in preview of the 1997-98 season:

The post was a well-researched and in-depth look at the North Carolina Tar Heels. Interviews with stakeholders and evaluations of performance and perspectives are standards to which modern publications must strive.

In an era of Carolina basketball in transition, it was interesting to look back on another season of change.

But this edition of Carolina basketball wasn’t the retrospective you’d expect after Smith’s 36-year career at the helm of the Tar Heels.

Even with their close relationship, it’s obvious Kilgo was unaware of Smith’s announcement that rocked the college basketball world on October 9, 1997.

Notice the cover: a scene from Smith’s 878th victory in the Eastern Regional Semifinal against Cal, and a dunk from Antawn Jamison.

In the top corner, “Dean Smith hands over to Guthridge” in a smaller font that’s different from the rest of the cover. A seemingly hasty addition.

On the first page there is a section on questions for this year. Looking back, a major question was missing:

How will the Tar Heels 1997-98 be without Serge Zwikker in the middle? Can Makhtar Ndiaye regain confidence and become a force at the center? Who will provide depth on the bench? Is any of the freshmen ready to contribute? What kind of defense will Dean Smith come out of his bag of tricks this season? Read and enjoy.

Throughout the season and player previews, the language is that of Smith’s 37th season as head coach of the Tar Heels. The list on page 67 even lists Smith as the head coach.

“Before Smith can even seriously think about going back to a pressure defensive system, some players who have yet to prove themselves at this level need to step up and produce depth.”

“As always with Dean Smith’s Caroline teams, he sets a schedule that makes his team better for tournament basketball, not a schedule that guarantees a bunch of wins over cupcakes.”

After player profiles, the record book, a section on Carmichael Classics and an interview with Dick Vitale, the coaches section concludes the 128-page magazine.

In this section, Bill Guthridge is introduced as Smith’s replacement. There is some great content on this change, including quotes from Guthridge. Some were before the announcement, and others after October 9.

The final section is devoted to Smith’s career. He focused on the perspectives of the current team and quotes from lettermen.

The section, in large print, boldly declares “His records will never be broken.”

Today it looks like a proclamation of Nostradamic proportions. But in 1997, with this giant just walking away from the game after a season in which the Tar Heels won 16 straight games to win an ACC title and reach the Final Four, it seemed right.

But records have been broken. Even Smith’s most successful college coaching mentee topped him on the all-time winning list that the magazine declared: “From now on, that record will be known as the Dean Smith Record.”

With Carolina basketball you can always find a way to connect the past with the present. The enormity of the moment in 1997 was felt the same way as the April Fool’s Day announcement just a few months ago.

At the end of the section on Smith, there is an editor’s note:

John Kilgo’s Carolina Basketball 1997-98 was written and printed before Dean Smith resigned on October 9, 1997. Obviously, some of the stories in the book will be about Smith in his previous role as head coach. However, the chapters on Bill Guthridge and Dean Smith were rewritten and reprinted after the announcement of Smith’s resignation and Guthridge was appointed head coach. We hope you enjoy this Tar Heels magazine, which should one day become a collector’s item.

If not in monetary value, this magazine offers unique value for the UNC fan. The duality of a preview of the season with Smith as the head coach and the tribute to his career is a peculiar, but special take on one of the defining moments in the history of the program.