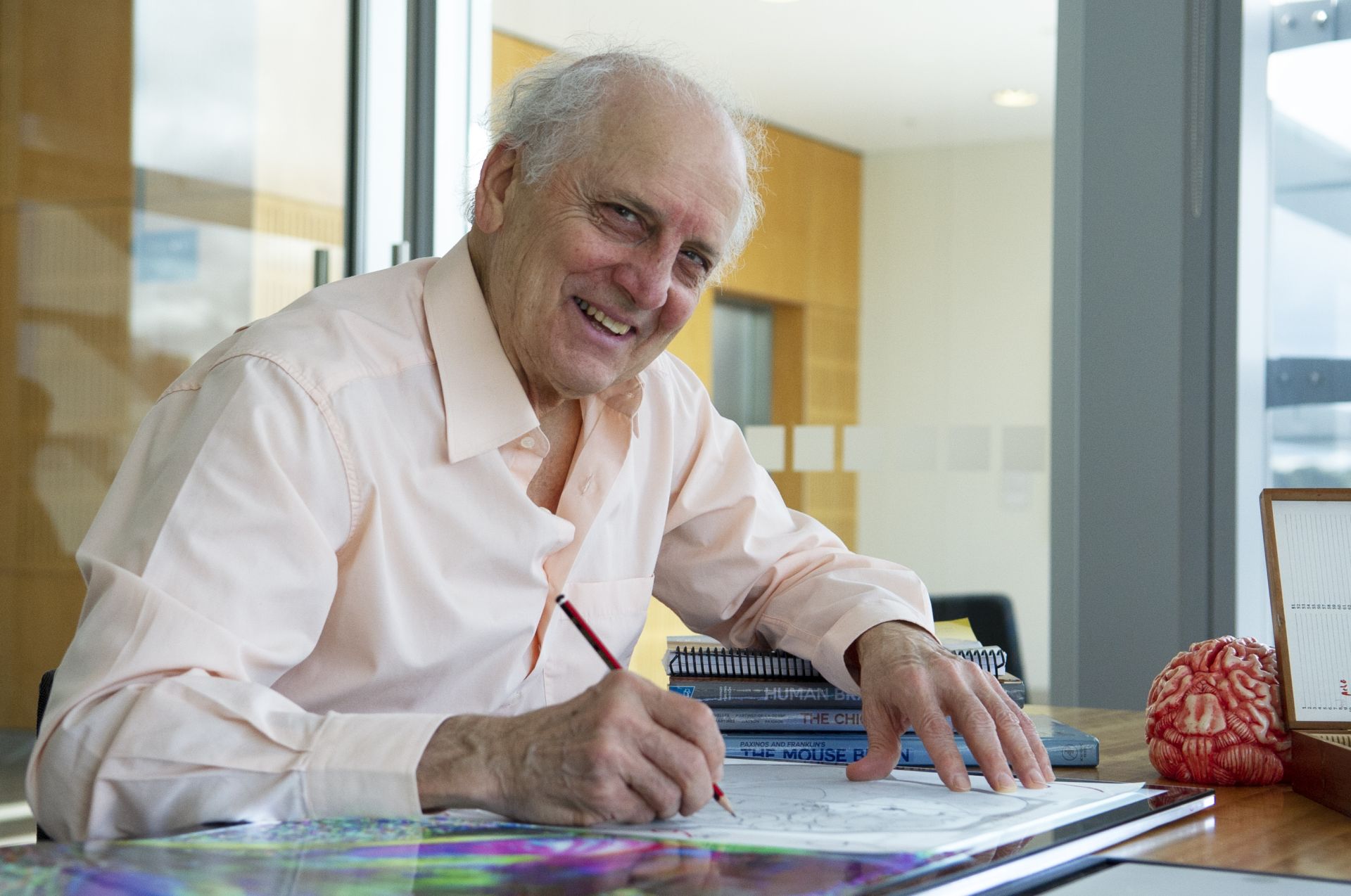 During a long and distinguished career in neuroscience, Professor George Paxinos has identified more areas of the brain than anyone in history, he has also written 57 books on the subject. Now he has plunged into the waters of fiction with the publication of his first novel “A River Divided”.

It took him 21 years and countless revisions to publish the book, a more difficult process than anything he had attempted before.

“The central idea came to me one night in 1999 of identical twins raised separately and I have filled the plot over the years,” Paxinos told Neos Kosmos. The rest was pure persistence as he set about writing and revising the book to his ultimate satisfaction.

The idea developed in the book for identical twins to be cloned from the remains of a man found at Masada, the Jewish fortress near the Dead Sea that withstood a Roman siege to death.

The remains are those of the biblical Jesus. The clone is accidentally split into two identical embryos which are transferred to two host mothers. One grew up in Australia, the other under completely different circumstances in South America. The twins find themselves in adulthood, facing each other from very different positions.

The story-driven novel grapples with important ethical and moral questions, with the environmental crisis at its heart. In the 1980s he was a leading advocate for founding the Light Rail Association to bring the streetcar back to Sydney and in 2015 he was the Australian Cyclists Party candidate for the New Wales State election. from South.

“The issue of our time today is the environment. I try to penetrate what Christ would have said today. In Christ’s day, the question was righteousness. We must not give the next generation the burden of a damaged environment, ”said Paxinos.

“If Christians get over the initial shock of finding (and cloning) the remains of Christ, I think they will find it was a choice made out of affection for Christ and the ideas he produced. I hope they don’t find this idea distasteful.

“A book needs heart, soul and spirit, the book has all three elements but it is also (about) reflection, conflict and internal debate. He is grappling with serious problems. “

The title of the book, “A River Divided”, refers to the confluence of two very different rivers, the Rio Solimões, colder and muddy, darker and warmer, the Rio Negro. The rivers that meet near the city of Manaus and retain their individual character until they eventually merge 25 km downstream to become the mighty Amazon River. Plans to dam a river in the area are attracting twins who are on opposite ends of the story.

The book’s action crosses various contexts in Israel, Australia, the Vatican, and South America, and the author has visited each location as part of his research to write the novel.

When he wrote “The Brain Atlas,” he devoted 110 hours a week for several months to complete it.

“I gave more to this than my scientific work,” Paxinos said.

“Literature is difficult. I wouldn’t let my science books go (for publication) until I couldn’t add anything more. I didn’t feel that way for this book and until the last moment I felt I was improving the manuscript. A book should hang with the right flow, expression and emotion, it should not be inappropriate.

His academic books are highly acclaimed in the neuroscience field with his first “The Rat Brain in Stereotaxic Coordinates” as the most cited publication in neuroscience and the third most cited work in the whole of science for several decades.

By teaching undergraduates and postgraduates over the years, he helped him assess what would work for readers of the novel. Unlike its academic books, a novel does not have to be didactic or preached, the story and the characters guide the flow of the book.

Some key concepts from neuroscience to make your way through “A River Divided”: the role of our genetic heritage versus the influence of our environment in shaping our character is an example.

“If the brain had been smaller we wouldn’t have had the technology, if our brain had been bigger and functioning better, we would have solved many of the issues that currently affect us. Unfortunately, the brain is just not the right size, ”Paxinos said.

“I used my experience as a neuroscientist to create the characters. I visited the places reflected in the novel and received a lot of help from scientists and others, including a Greek kindergarten teacher who noted the symptoms of temporal lobe glioma (which affects how the brain works. . “

He had first tried to get the book published in Australia, but conveying what it was about with the complexity of its themes was a problem. He took the manuscript to Greece in 2015 where Liberis Publications picked it up and translated it into Greek under the title “À son image”.

“The publisher in Greece said, ‘Don’t tell me, just read me the last page.’

“The lady cried and I thought a publisher would normally cry only if the book didn’t sell,” Paxinos joked.

After seeing the book in his native language, he gained a better understanding of the emotions of the characters he created and spent another six years improving the English version.

“Every time I revised the book I made a lot of corrections, but each time they improved the book. “

His hallmark perseverance has paid off, but Paxinos says his next novel should be titled “How to Write a Novel in Under 25 Years.”

♦ “A River Divided” by George Paxinos is published in Australia by Heads and Tales will be available from mid-November in Booktopia and in good bookstores.