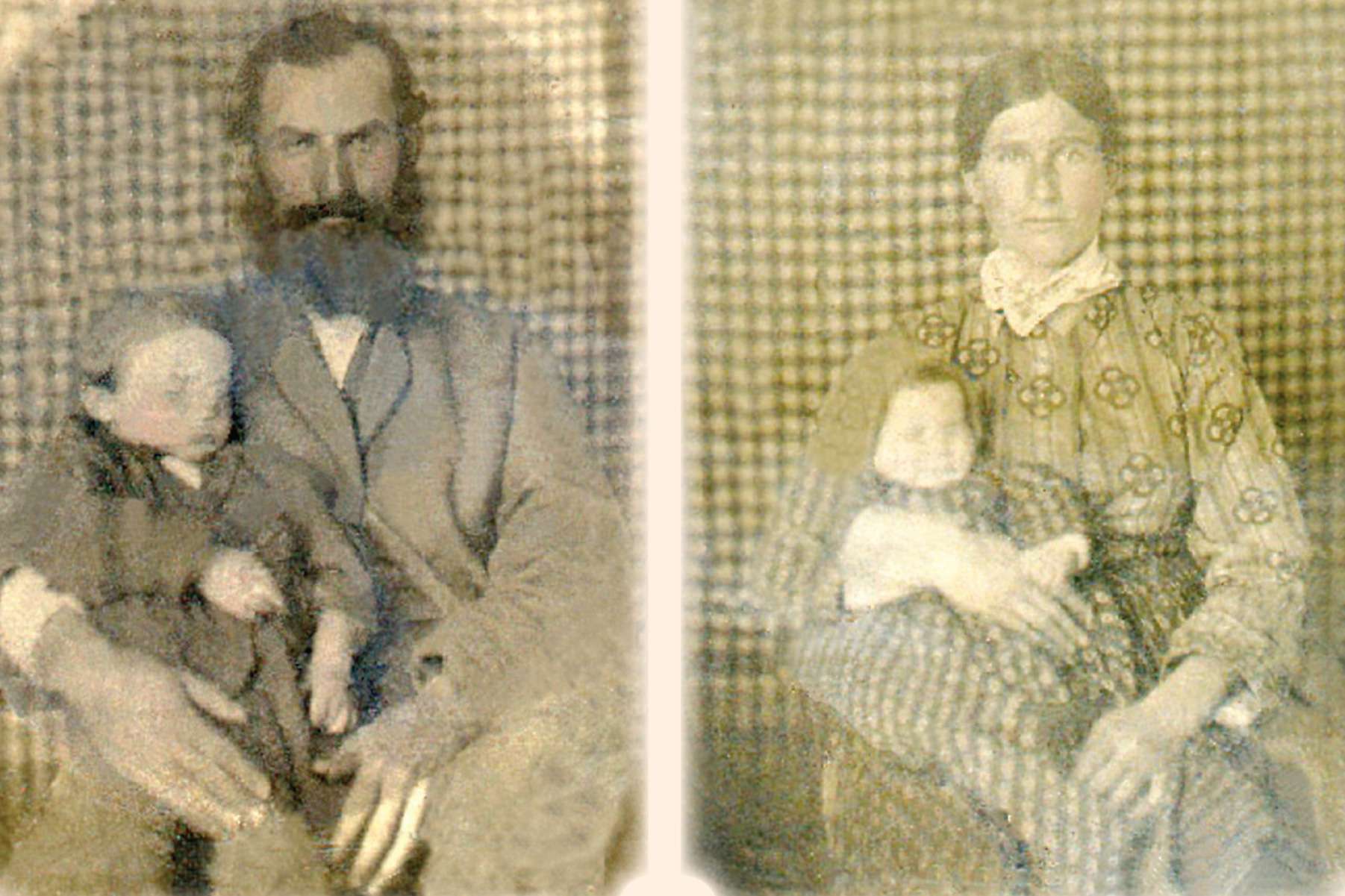 As a young man he was Lincolnesque in appearance. He had a stern but compassionate face, a jet black beard, and bald hair. And he lived in the Lincoln days as well – growing up with little, if any, material benefits in the American backcountry of the mid-1800s, but with a desire to do whatever it took to get himself. to improve.

His name was Daniel Jeffers, and his similarities didn’t end there, as he too was a rail splitter in his youth, besides being a self-made man in every sense of the word.

According to William A. York in his tribute to his great-grandfather in the book Scott County, Tennessee and his families:

“Often times he told his family how proud he was when he wore his first pair of boots which he had earned by slitting fence rails for a man who made boots and shoes for the people of. the community. At that time, all farms were fenced with split rails, so a large amount of rails was needed to fence a farm.

Daniel Jeffers was born September 6, 1837 (28 years after Lincoln’s birth) in what is now Scott County. He was the son of David and Pherba Yancey Jeffers. In his childhood years, he and his mother lived alone on a farm and he had few educational opportunities. In fact, he only had a few weeks of public education as a child and was in his twenties before learning to read and write, thanks to the tutelage of his sister, Almira Carroll.

Another descendant, Scott County District Attorney Leif Jeffers, notes that Daniel Jeffers was a Union soldier during the Civil War – and he indeed was – but not in the traditional sense.

Jeffers was a member of the Scott County (Union) Home Guard – a unit formed at the start of the war to “protect our homes, families, property and freedoms” during the war, as each member of the Home Guard oaths. . took.

The local Home Guard, called by the Confederates “Bushwackers”, was involved in a few skirmishes with the invading rebel forces, but two years later many of their members were sworn in as full soldiers (for 90 days) with the formation of the East Tennessee National Guard, when General Ambrose Burnside marched here with some 13,000 troops en route to Knoxville in August 1863. Apparently, however, Daniel Jeffers was not among them, for a reason or another.

Just four months before the war began, on December 27, 1860, 23-year-old Daniel married Sarah Hembree, daughter of Meshack and Martha Katherine Carroll Hembree. Sarah had previously been married to a man named John Goodman, from whom she had divorced two years earlier (July 29, 1858) for adultery. Sarah was restored in all the rights, privileges and immunities of an only woman (“never married”), and was restored under her maiden name.

They had 12 children in 21 years, and eight of the 12 are believed to live to adulthood. An ideal brood for a Scott County farming family at this time and time.

“After the war ended, he brought his family to Huntsville to live on a large farm of several hundred acres that he had purchased,” according to York’s 1988 account. “Cultivating was necessary, but it was not limited to agriculture. , [as] labor was cheap and agricultural aid was readily available.

At 41, Daniel Jeffers officially opened a new era in his life when he was called to the bar on November 29, 1878, immediately followed by the establishment of his own private practice in Huntsville, while overseeing the family farm.

He was one of the few attorneys in the county seat and was important among them here and throughout the circuit.

In addition, Jeffers has shown a great interest in the well-being of people and the community.

“When the courthouse was erected in sandstone, he served on the construction committee. He and Sarah were founding members of the Huntsville Presbyterian Church and a staunch supporter of the Church-related Academy, ”York wrote.

According to Esther Sharp Sanderson History of Huntsville Presbyterian Church and Academy and Mossip Memorial School (published in 1978), not only were Daniel and Sarah among the founding members of the church, but Daniel was also chosen as the first deacon. The formal organization of the Huntsville church took place on the second Sunday in July 1882.

Just three years later, in 1885, the Huntsville Presbyterian Academy was organized and among the three trustees appointed to oversee its operation was Daniel Jeffers (along with James M. Keen and JB Brasfield).

“The purpose of the Academy was to prepare students for college and give those who did not expect to go to college a good education in English,” Sanderson wrote. “Special attention was paid to those who wanted to teach in public schools. Better education in common schools across the county was a consequence of the training of teachers at the Academy.

For the rest of his life, Daniel Jeffers will be closely associated with both the church and the Presbyterian Academy which, incidentally, closed its doors the year Jeffers died (1909).

Jeffers was buried in what was then called the “Jeffers Graveyard” in Huntsville, as was his widow three years later. In addition, several of his children were buried near them in Jeffers Cemetery, as it is known today.

Daniel Jeffers’ name is not as familiar to the Scott Countians today as the names of other local lawyers of that time (Baker, Keen, etc.), mainly because Jeffers was not a politician. However, over a four-year period before becoming a lawyer, he served two terms as a police officer in the Scott County Fifth Civil District.

As a lawyer, much of his work has been in land disputes rather than high-profile criminal cases.

In Daniel Jeffers’ profile of Sanderson (in the book Scott County Profiles), she writes: “His temperament was such that he did not limit himself entirely to the practice of law. He loved farming, and he felt that working on the farm, alongside his sons, would give them a good training in developing a strong body and mind. He [also] owned and operated a flour mill located in Town Spring at the waterfall on Cane Creek. 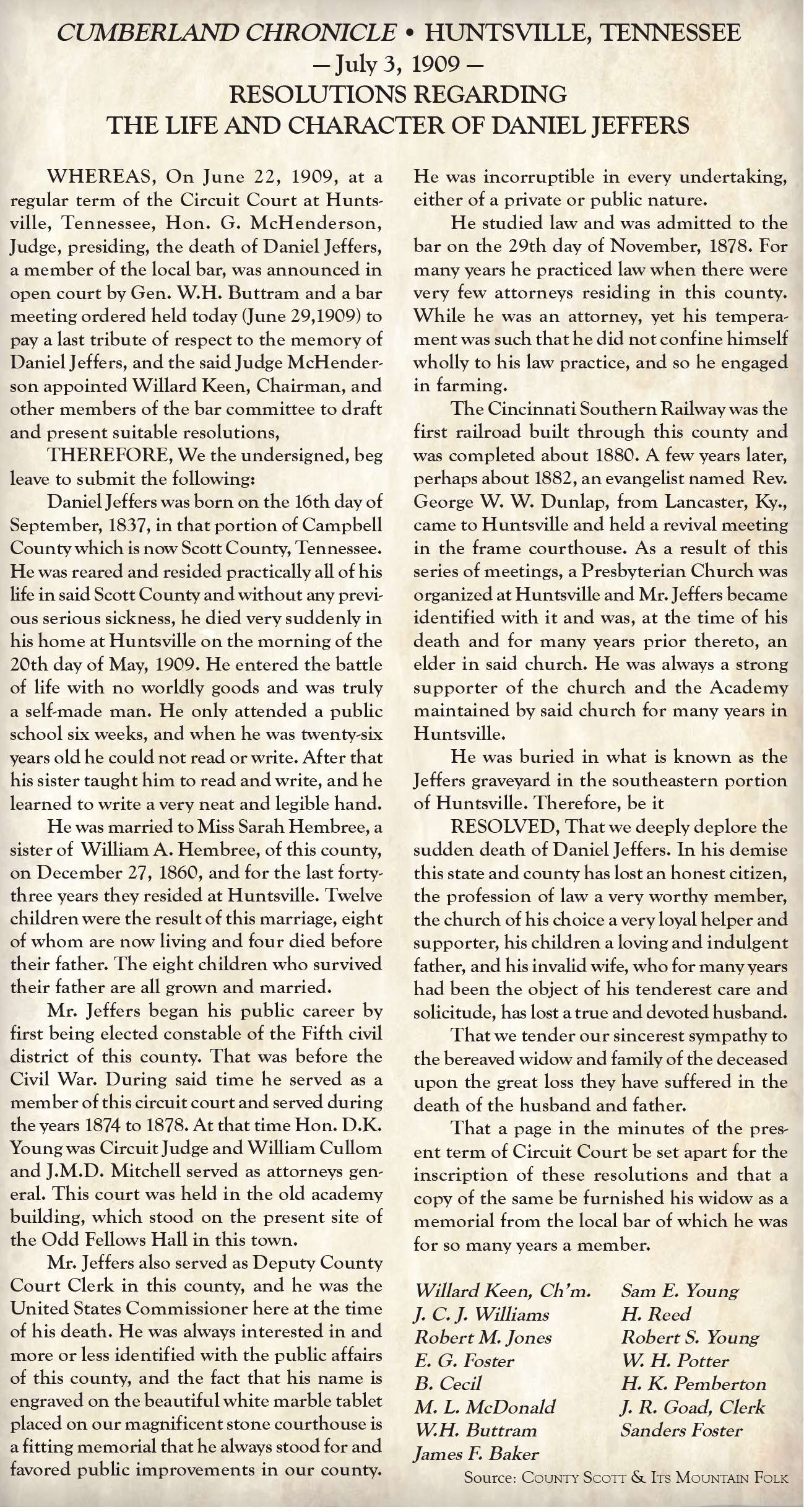