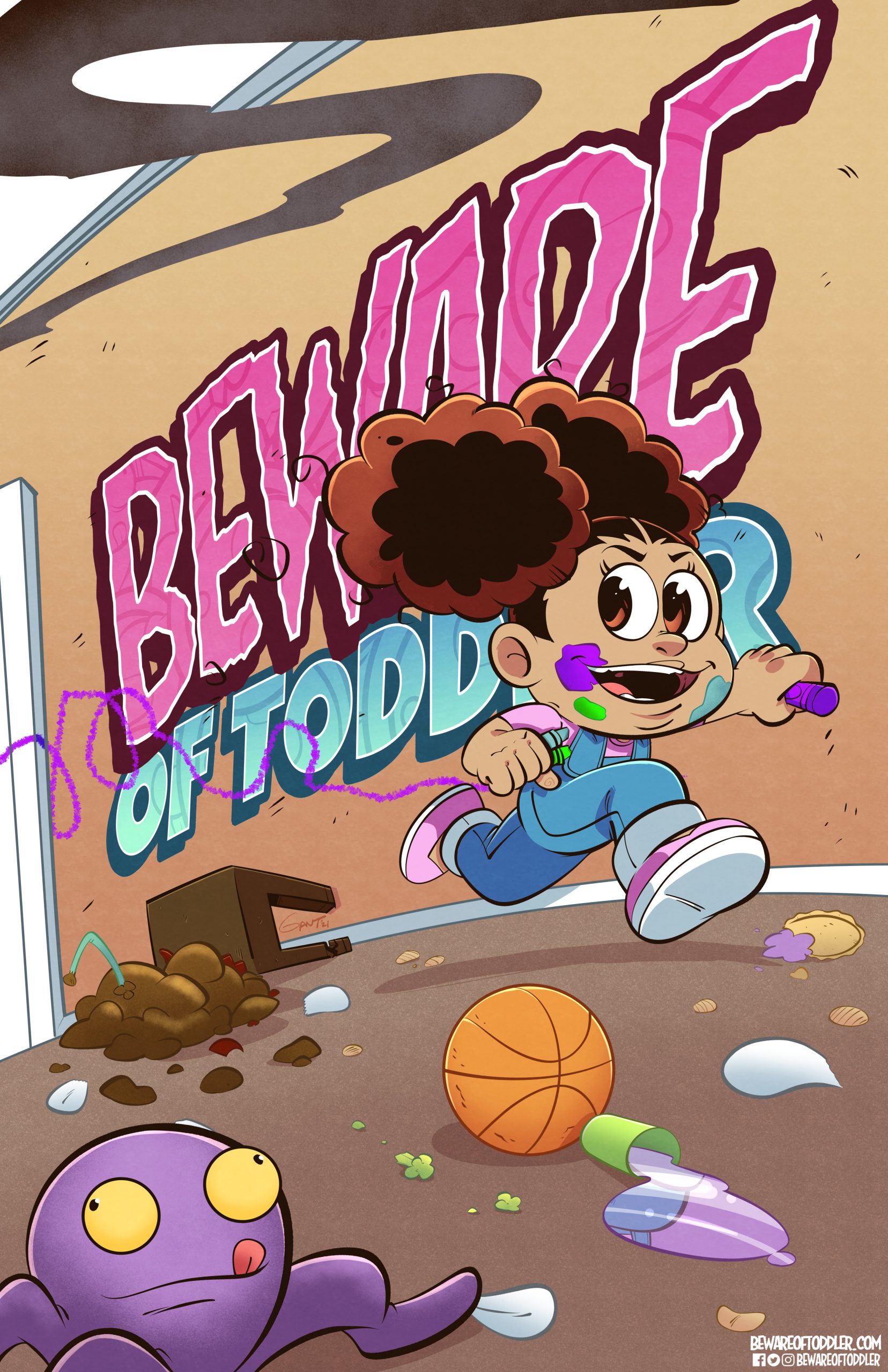 Raising a child, even a toddler, is a blessing that also comes with messes and other misfortunes. George Gant, creator of the episodic webcomic Beware of toddlers, shares his inspiration behind this adorable comic.

Beware of toddlers has to be one of the sweetest, most comical life comics I’ve ever come across. It shows the joys and stress of raising a toddler while balancing work and other obligations. This webcomic features hilarious moments like literally sending out a hot dog for hungry kids, popping multiple DVDs into the player, and playing with dinosaur-shaped chicken nuggets.

It’s a pleasure to have George Gant here to talk about his webcomic and more.

The Geekiary: Thanks to be here. Very exited! Let’s start by introducing yourself!

Georges Gant: Hi! My name is George and I am the creator of (now Nominated for the Ringo Awards) webcomic Beware of toddlers.

TG: I love your episodic webcomic Beware of toddlers. It’s cute, funny, and relevant. I would like to know how the idea came about.

George: Thank you! Shortly after my daughter was born, I was playing with my tablet when I drew a baby that looked * sort of * like her, holding a bazooka. I never finished the sketch or anything and it really didn’t go anywhere.

About a year later, I was playing hide and seek with her. Although she hid in a closet, she immediately found me. I found it hilarious and for fun I made a quick comic, just to see how people would react. To my surprise, people liked it a lot so I continued to draw them.

One day, I’ll finish this drawing with a bazooka.

TG: What is your creative process?

George: I’m not sure I have one, to be honest. I rarely have the time to sit down and write things down, as much as I want. I usually approach each comic with a specific idea in mind and present it in my head. I’ll refine my idea as I draw, but a lot of times I’ll just throw that idea out and find something in place while I’m drawing it. Apart from that, standard pencils then inks then colors then letters.

TG: What are your movies, TV shows, books, etc. favorite? Everything that inspired Beware of toddlers?

George: I was and still am a huge fan of The simpsons and were influenced by this, with Calvin and Hobbes and The Boondocks. My favorite show right now has to be Rick and morty, although.

TG: outraged Beware of toddlers, are you working or are you planning something else?

George: A little, in fact. Yeah, I have two other comics actually. One of them, The reset button, is an all-ages play comic that I’ve worked on in one form or another since 2006. I’m working on a graphic novel based on this comic online. I have another comic, titled On the grind, on which I would like to produce another collection of books. I also draw a weekly comic for The Beano called An angel’s face investigates, as well as the letter of several different books.

I want to point out that I am finishing a Beware of toddlers collection of books in the hope of launching a Kickstarter campaign soon.

Beware of toddlers is available for reading on WebToon.

The Middle Age through Steve conley

For more great webcomics recommendations, check out our Wednesday Webcomics Archives! You can also read more about the Black Creators and their work on The Geekiary here.

Brahidaliz (pronounced Bra-da-leez) graduated in 2019 from the Masters program in Creative Writing at American University. They are Submission Editors for Uncanny Magazine. Their diverse areas of interest include intersectionality in apocalyptic and disaster films, artificial intelligence, writing for animation, YA SFF, and LGBTQ + portrayal in children’s media.

Read our before commenting.
Do not copy our entire content from other websites. Links are encouraged.
Copyright © The Geekiary