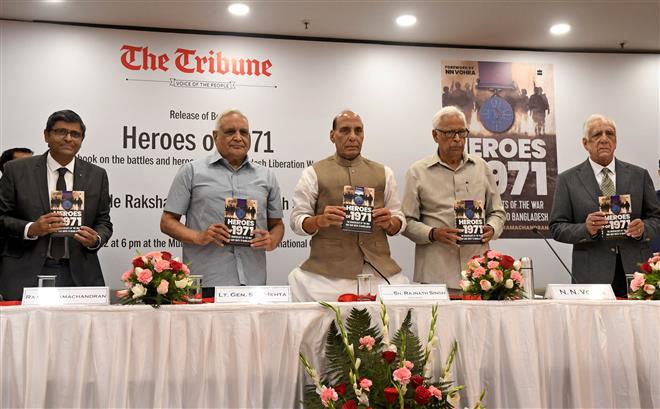 The nation is guilty of delaying the release of military history, former Governor of Jammu and Kashmir NN Vohra said while addressing a ceremony where Defense Minister Rajnath Singh published the book Heroes of 1971.

Lessons from the past

The importance of military history is that the next generation of officers must be educated about major battles. NN Vohra

Vohra, a former defense secretary, said the importance of military history was for the next generation of officers to be educated about major battles. “Why were these lost or won? These lessons are a good study of past wars and conflicts,” he said.

“The importance of military history is not only to learn from the past, but also to make people aware of the adversaries and the sacrifices that were made or who the heroes were,” said Vohra, president of The Tribune Trust.

He asked Rajnath Singh to consider having the authorized stories translated into major languages. Speaking about the book, Vohra said: “We (The Tribune) have published these special articles. We have dedicated a section to the Param Vir Chakra and Maha Vir Chakra winners.

“The aims of the war included the liberation of the people of East Pakistan and the creation of a new free country. It was a big victory. Its culmination changed the geopolitical scenario. I would pay a big tribute to the military and the police, then to Defense Minister Jagjivan Ram and then to Principal Secretary of Defense KB Lall,” he said. Vohra spoke about The Tribune, saying that the philanthropist Dyal Singh Majithia used all his wealth to establish a college, a library and a very good newspaper to disseminate information in the context of colonial rule and the struggle for freedom.

The Tribune is a dominant newspaper in Punjab, Haryana, HP, Chandigarh, J&K, parts of Rajasthan and western UP. “This region also has thousands of ex-military families and we are sensitive and particular in reporting their causes,” he said.

La Tribune has evolved since the struggle for freedom. During the tumultuous events at Jallianwala Bagh, the editor of The Tribune was arrested and publication of the newspaper was halted. Mahatma Gandhi stood up in support of the publisher and defended the newspaper.

“Our founder said that we must highlight the grievances of the people and the failures of the government in place, but without being partisan and by being secular and liberal. I am proud and affirm that The Tribune has lived up to its founder’s word and his apolitical attitude towards reporting and editorial policies,” Vohra said.