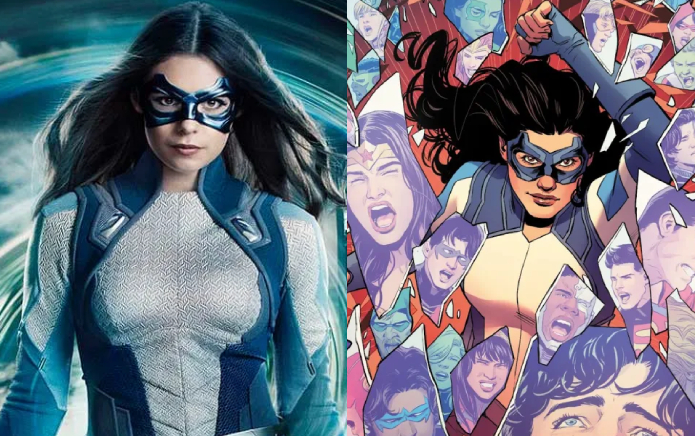 CW’s Supergirl character Dreamer is set to make her DC Comics debut in the upcoming issue of Superman: Son of Kal-El.

In 2019, the groundbreaking character made LGBTQ+ history as the first transgender superhero on TV – played by trans actress Nicole Maines.

Throughout Supergirl’s run, the inspirational character quickly became a fan favorite due to her incredible ability to see the future with dreams.

Unfortunately, fans were left disappointed when The CW announced that the show’s sixth season would be its last – which meant the end of Dreamer’s new storylines.

However, after a brief appearance in DC’s Pride 2021 anthology, the beloved character finally makes his official DC Comics debut in Superman: Son of Kal El #13.

For the new issue, Maines has teamed up with writer Tom Taylor to usher in the highly anticipated script.

According to the synopsis, the new issue will follow Jon Kent’s young hero and Superman as they race against time to stop Henry Bendix and his evil machinations.

In a recent interview with Our magazinethe 24-year-old opened up about the creative process behind Dreamer’s inclusion in the aforementioned comic.

“At the start of 2020, we didn’t know how long the Supergirl series was going to last or whether we would do a season seven or not,” she explained.

She went on to say that after meeting DC creatives, she began working on a Dreamer graphic novel alongside her appearance in the Pride anthology.

“My editor on this had also worked with Tom and had been interested in bringing him and me, and therefore Jon and Nia, together for Superman: Son Of Kal El,” she told the publication.

“So when I got an email in December asking me to set up a meeting, of course I said yes. After that very first conversation, I knew this would be the perfect place to bring Dreamer into the Main DCU.

Later in the interview, Maines discussed the importance of her character under current anti-trans legislation in the United States.

“It’s arguably one of the toughest times to be a young trans person right now, especially with the targeted legislation coming from our legislators.

“For this reason, it is invaluable to give these children a true protector. Someone who sees them. Someone who is them. I don’t think any reasonable person can doubt that trans kids are already superheroes.

Superman: Son of Kal-El is set to hit stores on July 13.